Dries Mertens has been on fire this season. Twenty four goals across Serie A and the Champions League so far marks him out as not only one of the most exciting performers in Serie A but also across Europe.

Therefore, it wouldn’t be too unreasonable to believe that if he were to leave Napoli this summer there’d be a queue of clubs with European football just waiting to sign him.

Not so, believe Belgian newspaper Het Nieuwsblad. In their Wednesday edition it’s claimed that because of Mertens’ age, he turns 30 in May, the Napoli player would have to set his sights lower… to clubs like West Ham and Crystal Palace.

At this point Slaven Bilic and Sam Allardyce may well be falling off their chairs and dreaming about a huge transfer, and Het Nieuwsblad clearly don’t think the prospect would be unreasonable. 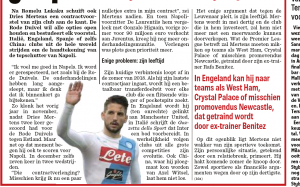 As well as West Ham and Crystal Palace, Newcastle United also get a mention, which would perhaps give the London clubs a better chance, especially the Hammers.

If the claims are to be believed then it’s West Ham who would stand out over Crystal Palace as the team able to offer the higher league position and probably the most money.

But, still, it’s hard to believe there wouldn’t be more interest. Mertens is turning 30 not 34.