Olivier Giroud is the star of Thursday’s edition of L’Equipe. The French newspaper has a feature on a possible exit from Arsenal during the summer transfer window.

A return to France is explained as a possibility, and reasons given why Lyon or Marseille could be a good destination for the striker.

Should Giroud want to stay in London, then West Ham are a ‘credible solution’ report L’Equipe. Slaven Bilic’s side are ‘very interested’ and currently ‘on the lookout’ for such a player, although it would be a step down in quality.

L’Equipe clearly believe that Marseille and Lyon would be more tempting than West Ham, if money and the London factor are left out of the equation. 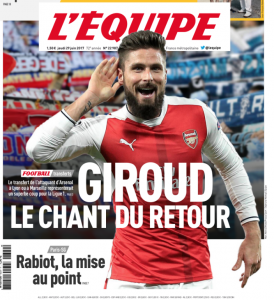 However, from what we can gather, the whole feature seems to be speculation based on not a lot.

Giroud gets the front page and then a splash inside, but there’s nothing overly concrete claimed. After reading the article one can be left as convinced Giroud will stay as that he’ll leave.

West Ham may well be being used as a prop in this to help create a little drama.