Getting rid of Marko Arnautovic, Andy Carroll and Lucas Perez while splashing £40m on Sebastien Haller, West Ham made it clear it was time for some new blood up front.

Handing Chicharito the number nine shirt could suggest the Mexican is staying, but Jordan Hugill, whose £10m transfer from Preston North End still confounds many, is a likely expendable if they can find him a club.

That would leave Manuel Pellegrini with just two strikers ahead of a long season, which isn’t enough.

While free agents like Mario Balotelli and Fernando Llorente have been mentioned by the English press as potential targets, the Italian media believe the Hammers are looking at a far younger and more exciting prospect: Patrick Cutrone.

According to Gazzetta dello Sport, West Ham are ‘one of the pretenders’ for the Italy international, and their interest is described as ‘concrete’, just like AS Roma’s in Suso. 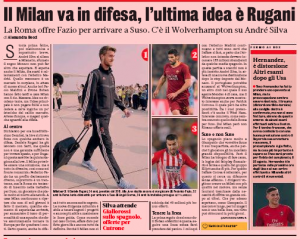 However, there has yet to be an offer for the forward, for whom the Serie A side are expecting a fee of around €25m, according to previous claims.

Whether the Premier League side have that left in the bank remains to be seen, but it’s an exciting name that shows ambition from the owners if they can pull it off, just like Haller was.

On the negative side, it’s worth noting that throughout reports of Wolverhampton being interested in Cutrone, it’s been claimed he isn’t interested in joining a team in England that doesn’t play for the top of the table.

Seeing as West Ham are unlikely to be doing that next year, they might have their work cut out when it comes to convincing him.