West Ham United have been linked with Jonas Wind for around a year, with claims coming again in October about interest from David Moyes’ side.

The 22-year-old has scored ten goals over 25 matches for FC Copenhagen this season, adding five assists along the way. He’s been playing as an attacking midfielder or further forward, and is a full Denmark international.

Those claims in October, which said West Ham are ‘closely interested’, stated Copenhagen would want at least €20m to allow their player to leave in the January window, however, the Premier League side may be able to get him for less.

Monday’s edition of Ekstra Bladet looks at players who could leave the Danish Superligaen in the winter market. 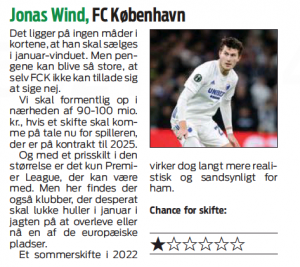 When it comes to Wind, they state interested clubs ‘will probably have to go up close to DKK 90-100 million’ to convince the Danish side into a sale.

At the higher end, that figure is around £11m, and that fee makes more sense than the earlier one.

It’s thought only Premier League clubs would be able to match the price in January, and whilst a winter move isn’t completely ruled out, Ekstra Bladet believe Wind will likely stay where he is, before a potential transfer next summer.