At the end of last month, Corentin Tolisso tested positive for Covid-19 and isolated at his home in France.

The midfielder returned to training on Tuesday, but his future could be away from Bayern Munich.

That’s according to L’Equipe, who say West Ham United have joined top clubs in keeping an eye on his situation at the Allianz Arena.

Tolisso, who has less than a year left on his contract, found out yesterday he’s not in Julian Nagelsmann’s plans. In addition to this, the Bundesliga winners’ officials have decided to ‘try to sell him as quickly as possible’ this summer.

This could be mainly be down to the duration left on his current deal and his poor injury record, which has restricted him to only 21 starts across all competitions over the last three seasons.

Therefore, the France international could leave Bayern before the window closes at the end of this month. 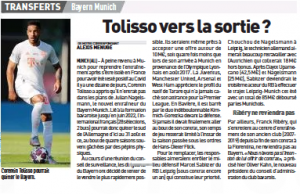 West Ham, along with Juventus, Arsenal and Manchester United ‘appreciate the profile’ of the player.

David Moyes’ side could have an opportunity to sign the former Lyon man cheaply, as L’Equipe state Bayern will sanction his sale if there’s an offer of around €10m.