West Ham United and Fulham are among the clubs ‘lining up’ to sign Chelsea’s Ike Ugbo, according to Het Belang van Limburg.

After coming up through the ranks of the west London club’s academy, the 22-year-old spent the past few seasons out on loan.

The forward spent the previous campaign with Cercle Brugge, where he managed 17 goals and an assist in 34 matches across all competitions.

He has entered his final year on his contract and the attacker may/must leave the Blues this summer.

David Moyes’ side and the Cottagers have joined Genk, Frankfurt, Feyenoord and PSV Eindhoven in the player chase.

Ugbo would give preference to regular playing time instead of ‘bags of money’. This, as per the report, would indicate the Chelsea man prefers the Jupiler Pro League side over the likes of West Ham and others.

Genk will need to bring in a new forward if Paul Onuachu leaves them this summer, and this is why they are looking at Ugbo. 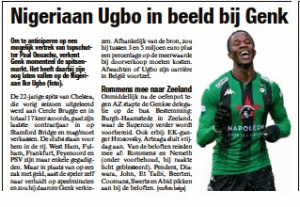 HBVL state Ugbo could cost between €3m and €5m plus a percentage on his future sale.

One needs to wait and see if Ugbo will continue in Belgium or decide to make a move elsewhere.