West Ham United were one of the clubs to show interest in Athletic Club Bilbao’s Unai Núñez in the winter market.

The Hammers seem to be still looking at the centre-back, according to Mundo Deportivo. David Moyes’ side, along with Everton, get a mention in today’s newspaper.

It’s claimed there has been a ‘talk of interest’ from the Premier League ‘at this time’, as West Ham and the Toffees have ‘sounded’ out for the 23-year-old.

Mundo’s report comes a day after the Spain international expressed his desire to go out on loan before the window closes.

“I’d rather go abroad, but what I really care about is playing, because my career is at stake; I can’t afford a fourth year in a row without continuity. I think it’s best to go out on loan, I insist. That’s how I’ve let the president know,” Núñez told AS.

The defender has a €30m release clause in his contract that runs until 2023. According to Mundo, he has already turned down three renewal offers and that’s because of a lack of opportunities over the last few seasons.

Núñez is now the third choice centre-back at the club, which is why he wants to go out on loan to play regularly at another club. The newspaper, however, states the ‘exit door would be closed’ for the defender.

With the player wanting to leave on a temporary deal, and the likes of West Ham and 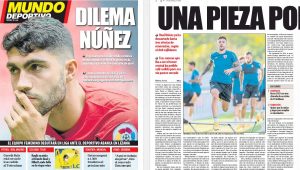 Everton potentially keen, Athletic need to make a decision whether to retain a player who has publicly asked to leave.