West Ham continue to be pointed out as one of the main candidates for the signing of River Plate fullback Gonzalo Montiel.

Argentine newspaper Olé brings a page-long story on the player’s future today, claiming that Roma and Valencia have been battling for him as well.

There’s actually a lot more detail on the chases from the Italian and the Spanish sides. They’re both said to be waiting for the season’s outcome to finally make an attempt for the signing.

Meanwhile, Olé insists that West Ham could try to sign Montiel for the second time in the summer, following their failed attempt in the January transfer window. 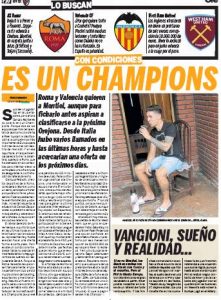 The Hammers tried to get the player on a six-month loan deal, which would include a buying option of €10m. But that was turned down by River Plate.

West Ham’s attempt has recently been confirmed by Montiel’s agent. Meanwhile, claims from Argentina have been saying that River Plate won’t take less than €12m for the player.