West Bromwich Albion midfielder Filip Krovinovic is ‘unlikely’ to return to Benfica in the summer, with the Baggies keen to sign him permanently.

The 24-year-old is currently on loan at the Hawthorns and has been a key player for Slaven Bilić’s side, making 34 appearances in all competitions so far.

His deal at the club runs until June 30th, but there is no option for West Brom to turn it permanent when it ends.

They plan to try and achieve that, though, with A Bola reporting that ‘there will be negotiations’ between themselves and Benfica at the end of the season. 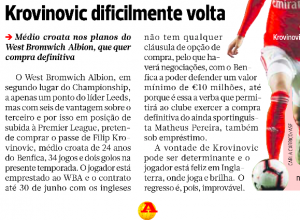 The Portuguese side will demand a ‘minimum value’ of €10m for the Croatian midfielder as that is the price included in teammate Matheus Pereira’s deal, who is on loan from Sporting.

Krovinovic will be ‘decisive’ in whether the move happens, but he is said to be happy in England, where he has shined for the Baggies this season.

That means a return to Portugal is unlikely, with the onus now on West Brom to negotiate a deal with Benfica for a permanent transfer.