Sporting loaned the player out to the Championship club in the summer window, his third loan away from the Lisbon.

Since then, the 23 year old attacker has been impressing in England’s second division, helping West Brom to top spot in the league.

On Monday, A Bola reported it’s just a matter of when West Brom use their €10m buying clause, and that the club are already considering selling him on for a quick and good profit.

Correio da Manha have it slightly differently, they report the €10m figure is ‘virtually guaranteed’ for Sporting. That’s not simply because the Baggies are expected to want to keep him, but due to further clauses in the contract. 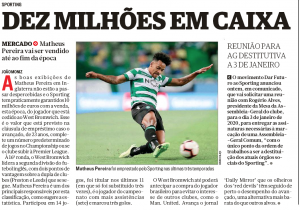 It’s stated that if Matheus plays a set number of matches for the club, or if they’re promoted to the Premier League, that West Brom are contracted to buy him.

Either way, this one looks a matter of time.