Sabah claim Besiktas want Shinji Kagawa in their squad for next season but are facing competition from West Bromwich Albion.

It’s reported West Brom manager Slaven Bilic, who worked at Besiktas for two seasons, is keen to sign Kagawa to boost his chances of Premier League promotion and he’s set to rival the Super Lig side for the Japanese playmaker.

However, Kagawa is reportedly not keen to play in the Championship next season which gives Besiktas an advantage over West Brom. Spanish clubs are also interested in signing the Borussia Dortmund owned player.

Kagawa spent the second half of last season on loan at Besiktas and scored 4 goals in 14 appearances.

There are reports the 30 year old would like to continue his career in Spain but if he doesn’t get offers from La Liga then he may re-join Besiktas. 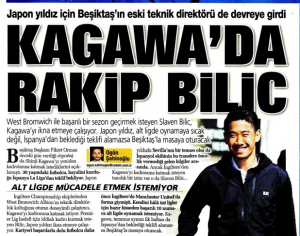 The former Manchester United attacker is under contract with Dortmund until June 2020.

“How can you avoid renewing if you’re champion?” – Brother hints Bielsa could sign new Leeds contract

“How can you avoid renewing if you’re champion?” – Brother hints...