Home Championship West Brom target looking for a way out of his club –...
SHARE

West Brom’s chase for the Sporting midfielder Matheus Pereira has gone a little quiet, but his transfer out of Sporting continues being pushed.

There are two stories about it in the local media today. One of them comes from A Bola, who says the player wants to leave the Lions.

Pereira has no problems with the manager or the squad, but since he wants to be a starter, he thinks he would be better off at a new club.

Jornal de Notícias also brings a story on the midfielder, this time saying Sporting are working to find him a place to play. 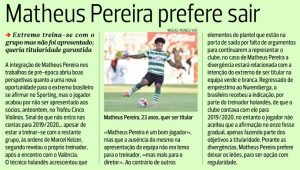 However, the Lions don’t want him to be loaned out. They are planning to sell the Brazilian for a fee of €10m… €5m less than previously claimed.

Jornal de Notícias mentions that West Brom ‘wanted him on a loan’, and Schalke 04 are trying to get him on the same basis.

With Pereira’s departure looking imminent, it all seems like a matter of who will get to Sporting and make a bid for a permanent move first.