West Brom may not have had the perfect return to football following the 0-0 draw with Birmingham City, but the match has certainly been welcomed in Lisbon.

Matheus Pereira made his 30th start for the Baggies, and that means the club are now forced to sign him permanently. That shouldn’t prove to be too much of an issue for the Championship side, given how much Pereira has impressed since arriving from Portugal last summer.

Sporting loaned the player to West Brom for a €500k fee, and Portuguese newspaper Record reports a source at the English club has told them the €9.5m to make the move permanent will now be paid.

This money means a lot to Sporting who, as always, are juggling their finances. Despite the big sale of Bruno Fernandes to Manchester United in the winter market, they’re short of available cash. 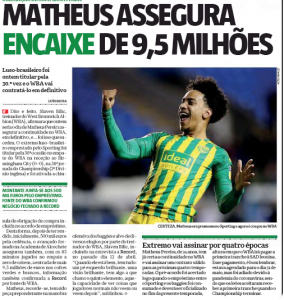 Fernandes’ transfer fee is being paid over the period of his contract. Sporting had agreed a deal with a German bank to get the money in one go, giving up a percentage, but that was cancelled after the Covid-19 outbreak.