The outlet writes that the 23-year-old has some mindset problems, and that’s the main reason why he couldn’t succeed at Sporting.

Now loaned to the Baggies until the end of the season, it’s said the player has found a club who can give him all the conditions to reach his potential.

West Brom are praised for having ‘patience’ and giving Pereira all the support to shine at the club. Here’s some of their words about the midfielder:

“Matheus Pereira today has his confidence reinforced by the command, which gives him free rein to release his instinct. He gained freedom to create and be happy, in order to moderate the harmful effects of the repressive values of tactics, effort and other obligations. In this way, he rediscovered the affective framework and the necessary commitment to the place, supporters and values that surround him.” 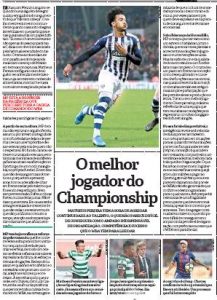 The piece describes how Pereira was first seen as a skillful winger, with manager Slaven Bilic then using him in a central role, giving the player all the freedom to create plays.

“He became the best player of the Championship, the highest reference of a team that has the conditions to return to the life of the English football giants.”

Record writes that West Brom are now paying €10m to sign Pereira on a permanent deal, but there are other clubs who can spend €25m to take him from the Baggies.