Filip Krovinovic is close on moving back to West Bromwich Albion, according to reports from the Portuguese media on Wednedsay.

Newspaper O Jogo says the negotiations is ‘practically done’, and the agreement between the clubs should be announced this week.

Krovinovic is expected to move to the Baggies on a new one-year loan, with no buying option for the Premier League side.

Before completing the transfer, he’s also set to extend his contract with Benfica. His current deal expires in 2022, and he’s agreeing to one year more. 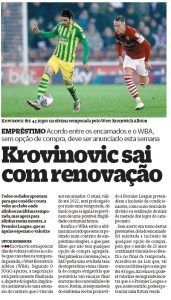 O Jogo also brings some details on why the negotiations have been taking so long. They say Benfica initially wanted a fee for the loan and an obligatory buying clause of €11m.

West Brom only wanted the clause in case it depended on a few factors, including avoiding the relegation to the Championship.

The clubs couldn’t find a deal, and Benfica rejected the possibility of a buying option for the Baggies. Now they hope that a good season in the Premier League will make Krovinovic more valuable at the end of the spell.