West Bromwich Albion have once again been named as a potential destination for Vedat Muriqi during the January transfer window.

Lazio Siamo Noi reports that Muriqi’s club have hit something of a stalemate when it comes to their January business. They can’t bring anyone else in until there are further exits, with the business done so far not enough to balance the books to the required extent.

They have several possible exits, and Muriqi is one of those.

Earlier this week it was reported a move to CSKA Moscow was closing in, something which was later denied by Lazio director Igli Tare.

Lazio Siamo Noi address Tare’s comments, in which he said the CSKA claims were lies, and they say there’s still interest from the Russian club.

West Brom and Leeds also get a mention, with Hull City now seemingly dropping out of the picture.

Quite what Muriqi would think about a move to the Championship hasn’t been shared, although it’s understandable if he’d prefer to look at other options first. 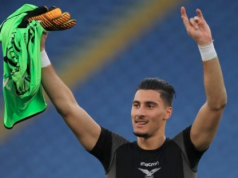