During the summer transfer window, West Brom were strongly, if not especially repeatedly, linked in Portugal with a move for Andreas Samaris.

West Brom were said to be on the verge of a €20m deal to sign the midfielder, but Benfica put a block on the move. The Lisbon club felt they needed Samaris for cover this season, but he’s slipped further down the pecking order and is now very much on the market, report A Bola.

The summer interest from West Brom is mentioned by the Portuguese newspaper, and it’s explained now there’d be a big discount. A Bola state Benfica wanted €16m during the last window but will accept less now.

Whilst that doesn’t exactly fit in with the €20m claims, it certainly provides an opportunity 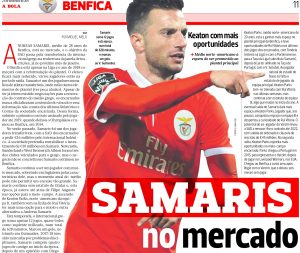 Earlier this month, Sport Witness presented Samaris as a renewed possibility for West Brom, given his dwindling Benfica status.

Just hours later the Premier League club had an official scout Benfica, something they’ve not really done since the summer, and the pieces fit into place.