There’s an update in the Kieran Gibbs to Torino story, and we know you’re all very excited about it.

The article comes from Corriere dell Sport in Italy, who reveal the Serie A outfit have ‘asked for information’ about the West Brom defender, as well as ‘contacting’ the Baggies over the past few days.

This is all to try and understand how much the deal could end up costing, and the answer to that is around €6-7m for a loan with a view to buy.

The price appears to have risen over the weekend, as Tuttosport had it at around €5m a few days ago. 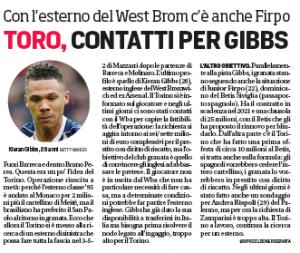 The tricky part for Torino is to convince Gibbs to lower his wages, despite the player being open to a move to Italy, even if West Brom aren’t particularly looking to get rid of the 28-year-old.

Our guess is Walter Mazzarri, once manager of Watford, liked what the former Arsenal man had to offer in the Premier League and believes that would translate well in Serie A.