Grzegorz Krychowiak has had a torrid time since leaving the sunny streets of Seville.

PSG seemed to sign him without really needing him or working out what meaningful role he’d play, and so after a season of being largely ignored it was off to West Brom on loan.

Krychowiak hasn’t been a disaster, but the general situation has been and the Polish midfielder hasn’t been able to do much to stop it.

With the Championship appearing on the horizon it’s unlikely West Brom would want to pay a fee for Krychowiak and cover his wages, and he probably doesn’t fancy England’s second tier himself.

So now the footballer is back to being PSG’s problem, and he’s one of a series of problems for the club to deal with. They need to bring in money to help with FFP, but some of the French club’s signings haven’t been wise and they’re set to make a loss.

Damien Comolli has been speaking to L’Equipe about PSG’s situation. The former director of football seems to love speaking about clubs he’s not involved in and explaining where things have gone wrong.

On Krychowiak, Comolli explained: “PSG can imagine recovering some €10m in this operation. Krychowiak remains a good player who still has a market in France, Spain or Italy. The best strategy would be to opt for a loan with an option to buy so that it has a value. Because on this summer market, Krychowiak is only worth between €8m and €10m.” 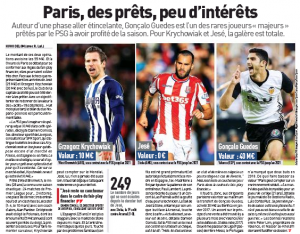 With all due respect to Comolli, if PSG can’t find a club to pay them over €10m for Krychowiak, based even entirely on his Sevilla days, then they’re doing something wrong.

Worst case scenario for PSG is probably agreeing to a Sevilla loan with a low buying clause which then gets lowered even further. West Brom are very unlikely to be involved.