During the summer transfer window it was reported in Portugal that a €20m West Brom transfer for the Greek midfielder only failed as Benfica were concerned about Ljubomir Fejsa’s fitness.

Those concerns no longer exist in the same way, and Samaris hasn’t even always been first substitute, so a January transfer looked like having a better chance of success for West Brom.

With excellent timing, West Brom sent an official to Benfica’s match against FC Basel on Tuesday night. With Benfica way out of things already, on zero points, it was expected they’d field a weakened side, and give players like Samaris a chance.

And for the first time since August, West Brom had someone there. A Bola have published the long list of scouts in attendance, and most of them visit regularly… but not West Brom. So it certainly suggests the Baggies wanted to see a fringe player.

Samaris started and got 73 minutes, which earned him 4/10 from A Bola, one of the higher Benfica ratings in another poor defeat.

As for other possibilities, West Brom were linked with Andre Horta in the summer, but 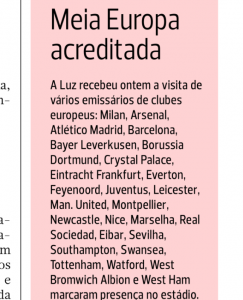 he’s on loan at Braga now. Gabigol is being edged out but the Brazilian striker doesn’t immediately seem a West Brom kind of target.

João Carvalho played on the left side of midfield, with the 20 year old having a good game relative to his teammates, and there’s been rumours of a possible move to England.

Raul Jimenez, a Mexican striker, was linked with West Brom and several other Premier League clubs in the summer, but didn’t get off the bench.