Home Europe West Brom midfielder told he’ll have every chance to prove himself before...
SHARE

Pushed to one side by Tony Pulis early on in the campaign, the former Tottenham midfielder was then injured for the majority of Alan Pardew’s tenure, meaning he currently has more appearances for Belgium over the past nine months than he has for the Baggies’ first-team.

That’s why, despite only featuring four times for the Premier League team, he is still being considered by Roberto Martinez for the upcoming World Cup.

At least, that’s what the Spanish manager told L’Avenir on Thursday in a long interview when asked about some of the injured players he could still count on if they returned to full fitness. 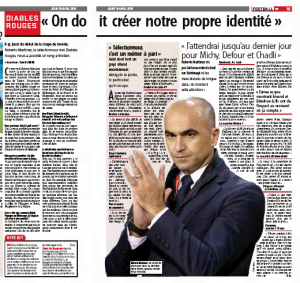 He said: “They (Defour and Chadli) are players who invested themselves for two years in order to get the qualification for Russia. For them, the door will remain open until the very last day”

With 42 caps under his belt for his country, the West Brom midfielder is certainly one of the more experienced players in the group, and while he would never be a guaranteed starter, he does offer Martinez some flexibility, as shown by his time spent as a left-wing back under the Spaniard.

Versatility is very important in a World Cup squad, especially when injuries can be the bane of an entire country during the tournament, and that’s surely something the former Everton manager will be thinking about when drawing up his list.