As you well know, Kamil Grosicki’s situation at West Bromwich Albion isn’t the best these days.

Pushed to one side by Slaven Bilic, the Poland international will have been hoping Sam Allardyce taking over meant more time on the pitch, but that hasn’t been the case.

The forward has barely featured for the Baggies ever since they returned to the Premier League, which is a cause for concern over in his home country.

A move to Legia Warsaw is apparently in the pipeline, but that hasn’t fully taken off yet, and journalist Antoni Bugajski asks some very relevant questions in Wednesday’s edition of Przeglad Sportowy.

With new Poland manager Paulo Sousa now preparing for the upcoming summer Euros, Grosicki’s situation is looking at, as is Arkadiusz Milik’s.

As things stand, ‘there are not many rational premises to put him in the frame at the moment’, meaning the West Brom man’s chances of making the squad ‘rest on opinion and sentiment associated with the good old times’. 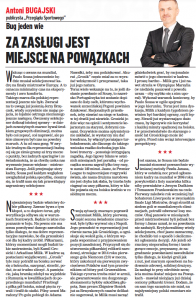 Why his managers at club level don’t see the same player the national team do ‘remains an intriguing mystery’, and his league record ‘has been a defeat’.

While the Premier League remains the best league in the world, Poland’s national team is ‘probably not so weak that you have to select a player who appears on the pitch on average every seventh game’.

It’s something that needs to be addressed, which is why the move to Legia Warsaw is being explored, but with finances an issue in getting that over the line, it’s hard to see a way out for the Baggies man before the summer.