The 23 year old midfielder has failed to impress new manager Phillip Cocu during preseason and there’s a strong chance he could leave the Istanbul club in this window.

The 39 capped Turkish international’s form has dipped since the start of last season and Aksam say Cocu isn’t keen on working with him.

It’s reported West Brom are ready to offer £2.7m to sign Tufan, and Fenerbahce are likely to accept this due to their financial problems.

West Brom have also been linked with his club teammate Josef de Souza, but a move to the Championship side has gone quiet in recent weeks, with the player now receiving interest from the Premier League. 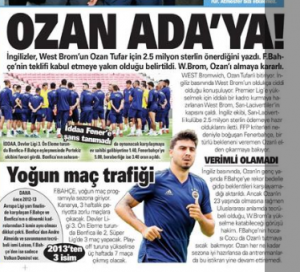 Tufan came very close to signing for Crystal Palace in the last transfer window, but the Premier League side pulled out of a deal at the last minute.