Chris Willock’s transfer from Benfica to West Brom has been one of the few surprising moves of the deadline day this year.

The 21-year-old has joined the Baggies on a season-long loan from the Portuguese side, and now the Lisbon media brings some more details about the deal.

Newspaper A Bola says there had been clubs interested in keeping him in Portugal, but the player wanted to return to his home country to finally make a ‘jump’ in his career.

But despite his attempt to succeed in English football again, it’s not guaranteed he can stay beyond the season.

A Bola says the loan has no buying option for the Baggies, and the player has the ‘order to return’ to Benfica at the end of the season. 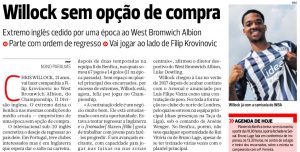 Chris Willock signed a five-year deal with Benfica when leaving Arsenal as a free agent in 2017, but he didn’t really manage to have any chances to play for the Eagles’ first team, having only made appearances for Benfica B.

This should be a sign the Eagles may be open to a future sale, but they will certainly wait and see how Willock does at West Brom before setting a price.