West Bromwich Albion are keen on Genk striker Mbwana Samatta but may have to fight through work permit issues to get him.

Samatta was the top goalscorer in the Jupiler League last season and has earned more recognition this season with seven goals in 20 games so far.

Three of those have come in the Champions League, including a goal at Anfield in the 2-1 defeat to Liverpool and that has earned him plenty of attention.

Clubs around Europe are looking at him as a potential signing, and according to Het Laatste Nieuws, West Brom are one of them.

HLN report the Baggies are one of four clubs in England (the other being Brighton, Crystal Palace and Norwich) to have ‘closely followed’ Samatta’s progress and ‘would be interested’ in signing him this month.

Genk are hoping the player will stay but know that there is interest and an amount ‘around ten million’ would make them sit down and negotiate a move. 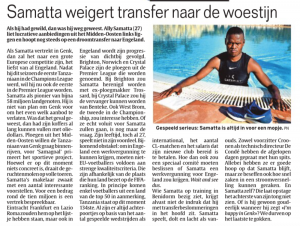 West Brom may have to work hard to get Samatta to England if they do want him this month though.

While he is keen on the move, EU work permit regulations are likely to hold him back, with a special committee likely to be needed to decide whether he could get a work permit to make the move to the Hawthorns.

Nottingham Forest and Swansea put offers ‘firmly on the table’ –...