William Silva de Carvalho. There’s a man who will never stop being linked to Premier League clubs, as this has been a saga following him since the start of his career.

The 25-year-old international has shown potential since his first years at Sporting, and was first linked to clubs such as Arsenal and Manchester United. The destinations changed over the years, with Liverpool and Newcastle thenalso said to be interested.

Since Pepe Guadiola’s brother Pere started acting as Carvalho’s agent, the midfielder has been said to be a Manchester City target. But there’s an old admirer being linked today which caught our attention. 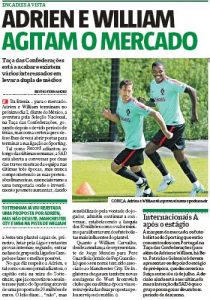 According to Record, West Brom have recently made approaches for the player, and Tony Pulis’ club is considered to be a serious contender this summer.

West Brom are the only Premier League side who have made an offer for Carvalho over the past year. They’ve done it twice, and the Portuguese and English press disagree a bit about the amounts, although it should be something between €20m and €30m.

The midfielder is one of the Sporting players who could leave in the summer, and West Brom probably wouldn’t have to pay the €45m release clause to get him.

Depending on how much they’re willing to pay upfront, West Brom should be able to do a deal for somewhere upwards of £30m.