A lot of what West Bromwich Albion do in the summer will depend on whether or not they stay in the Premier League.

That may be obvious, but it needs to be pointed out, especially with the futures of players such as Mbaye Diagne potentially riding on upcoming results.

As things stand, Sam Allardyce’s club sit 19th in the table, eight points behind Fulham and ten behind his former side, Newcastle.

With just nine games to go, avoiding the drop is certainly a tall order, but we’ve seen great escapes in the past, and if one manager is experienced in that particular department, it’s the one they have in charge.

Either way, should they stay up, more money will likely be spent in order to try and avoid a repeat relegation battle, which is where Vedat Muriqi could come in.

The Baggies, with Slaven Bilić then in charge, pursued the Kosovo international throughout last summer, only to see him choose Lazio over a move to the Premier League.

That, however, has backfired, as he’s barely played, and when he has, he hasn’t really performed, scoring just two goals in 24 appearances. 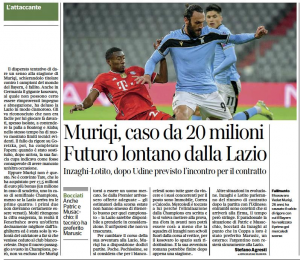 Perhaps that’s why Corriere della Sera, looking at what the future holds for the 26-year-old, believe he could leave in the summer, with his career ‘far’ from Rome going forward.

While Lazio haven’t actively put him on the market yet, it’s suggested they might just do that, and ‘if adequate offers arrive from the Premier League, Lazio would be available to take them into consideration’.

As for West Brom in all this, we bring them up because the newspaper add ‘the admirers of last summer have not stopped considering him good for that league’, and we all know Allardyce doesn’t mind having a big man up top.

The arrival of Diagne in January demonstrates that, and if the Baggies stay up, returning for Muriqi could be a deal worth exploring.