On Friday, L’Equipe have a big feature on the January transfer window, and how each Ligue 1 club will be approaching it.

With a lot of repeat business between the Premier League and France’s top division, it was no surprise to see several English clubs mentioned… including West Brom and Crystal Palace.

When L’Equipe came around to Angers, Karl Toko Ekambi stood out for them as a target for other clubs in the January window. Toko Ekambi is the club’s top scorer this season, finding the back of the net 9 times and adding 2 assists. 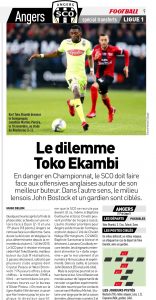 The French newspaper say Angers will only sell Toko Ekambi if he asks to leave, and it’s insinuated a salary offer of around €200k per month would be tempting.

Club will look at Manchester United player’s future ‘in the spring’ – No rush, might need to play a bit more

Liverpool said to have made €22m attempt at signing – Reds...

Club will look at Manchester United player’s future ‘in the spring’...