Karl Toko-Ekambi has been linked with a string of Premier League clubs in recent weeks, as it’s becoming abundantly clear someone in France is pushing the idea of English interest.

On December 22nd, Crystal Palace and West Brom were reported by L’Equipe to have ‘asked’ Angers about the potential January signing, probably wanting to know how much the attacker would cost.

Now, L’Equipe are back on the case, with their December 30th issue reporting Burnley and West Brom have made contact with Angers. Despite mentioning Crystal Palace a week ago themselves, L’Equipe now leave the London club out.

A bit of mess? Yep, and there’s more.

A mystery English club is said to have made of an offer of €13m, including bonuses, for the player. Angers don’t want to let Toko-Ekambi leave unless he asks to move, which sounds 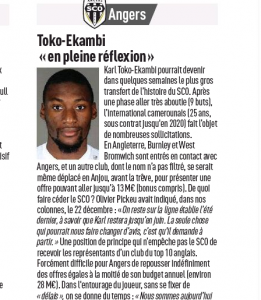 L’Equipe doubt whether the French club would really be able to hold off offers of such an amount, given their annual budget is only €28m.

So, if not Burnley or West Brom, was it Crystal Palace who made the offer? There’s no indication, but this rumour is having new bits added continually.