West Brom had to jump through the transfer hoops of Sporting in the summer, in order to secure the signing of Matheus Pereira.

The Lisbon club appeared to be in two minds about the structure of the deal they wanted, and were perhaps using tactics which didn’t work too well with the Baggies. Schalke were brought in as supposed serious competition, however, it felt more often than not that West Brom had was the concrete option and it was a case of Sporting trying to get the best deal possible.

After a few weeks the transfer was dragged over the line on a loan basis, with it being reported in Portugal the Championship club had a buying option of €9m.

Tuesday’s edition of Record reports West Brom are looking to use that option when the January window opens. Leaders at the club have already ‘expressed interest’ in paying the €9m, and the idea is the 23 year old will become a permanent recruit in the winter market. 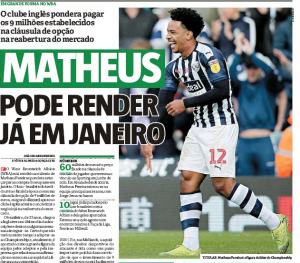 It’s not mentioned by Record, but there’s no obligation to wait until January. Pereira is already registered at West Brom and agreeing the permanent deal doesn’t require further registration.

Record report they know the feeling is mutual, and Pereira himself is keen to make his move to West Brom a permanent one. That would suggest the information is coming from someone close to the player.