That’s what L’Equipe are reporting on Friday, and the short story states the 23-year-old is in ‘advanced contact’ with the Baggies.

As per the report, Slaven Bilić’s side and the Latics have ‘just agreed’ a fee for the player.

The newspaper doesn’t specify the price in their report, but the fee shouldn’t be high considering the centre-back’s contract runs down next summer.

Kipré has not yet found an agreement with the newly promoted Premier League club, and he continues to negotiate to sort out personal terms with West Brom.

Kipré arrived at DW Stadium from Motherwell in 2018, and went on to make 74 appearances in the league in the past two campaigns. 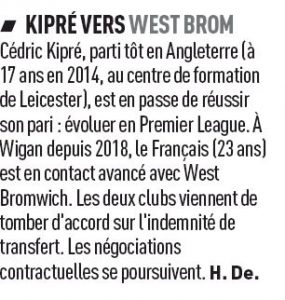 Both West Brom and Wigan were in the Championship last season, but will not be in the same league next term.

West Brom climbed to the Premier League, while Wigan were relegated after receiving a harsh points reduction.