At Huddersfield for two seasons, Laurent Depoitre didn’t exactly shine when it came to goalscoring, putting the ball in the back of the net just six times in 60 games for the now Championship side.

Since his return to Genk in the summer, the 30-year-old already has four goals to his name in five appearances and is clearly thriving in a system that isn’t David Wagner’s or Jan Siewert’s.

However, according to the player himself, in an interview with Sport/Foot magazine, there are many other details at Huddersfield that made it difficult for him and many others to thrive at the John Smith’s Stadium.

Now back in the comfort of his former club Genk and their brand new training centre, Depoitre took the opportunity to have a number of digs at the Terriers.

He said: “[The training centre] is way better than Huddersfield’s. The first thing that shocked me there was that the club wasn’t ready for the Premier League. They got promoted a bit by surprise just before my transfer. They came fifth in the Championship and then won the playoffs.

“The negative side was that they weren’t ready. They didn’t have the infrastructures. You could see it everyday. You could feel the lack of professionalism in a lot of things. For example, the car park wasn’t big enough for all the player’s cars. The dressing room was too small. There was only one toilet for the first-team. The gym wasn’t well equipped, and I could go on…”

Explaining that feeling comfortable at the club you play for makes it easier to perform on the pitch is important, he also added the grass in training wasn’t always great, making it ‘difficult’ to train at the best of his ability.

Depoitre continued by echoing certain criticisms made by Steve Mounié (who is still at the club) a month or so ago, stating that Huddersfield’s transfers ahead of the second season weren’t good enough and the club should never have rid themselves of so many players with Premier League experience, only to replace them with youngsters who had never played at the highest level. 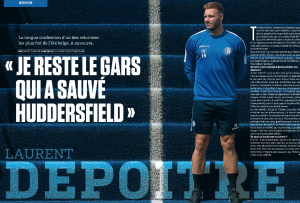 The Belgium international makes it clear in the interview that as soon as the club was relegated, he wanted out, especially after losing the trust of Jan Siewert, who has since been sacked after a poor start to life in the Championship.

Despite the lows, Depoitre still has some great memories from his time at Huddersfield, notably the two goals he scored against Manchester United and Chelsea, with the latter of the pair being the one that meant the club would stay in the Premier League for an extra year.

As for his lack of goals during his time there, the striker feels he showed he had the level to hold his own in England’s top-tier, but admits the football David Wagner played wasn’t exactly centre-forward centric.

He said: “We played too defensively, taking few risks and didn’t get a lot of chances. The aim was mostly to concede as few goals as possible. In those conditions, it’s hard for a striker to show what he can do, to seduce the scouts.

“You don’t find yourself a big English club by not scoring many goals. In fact, I can see other Huddersfield players are struggling to find new clubs. Last year was bad for the club and for each individual player”.