Currently still recovering from an ankle injury and missing out on Arsenal’s pre-season tour, Jeff Reine-Adelaide’s future at the Emirates is far from a certain one.

Despite few batting an eyelid at the 19-year-old’s omission from Arsène Wenger’s group due to his fitness status, there might also have been an ulterior motive for the former Lens youngster being left out.

According to France Football in their magazine this week, the French manager doesn’t want Reine-Adelaide at the club anymore, and talks have already taken place to try and find him a new club.

The French outlet claim that two meetings between Arsenal and Nice in Ligue 1 were held about the possible signing of the youngster, but, ultimately, nothing came from them.

This led Lucien Favre to cancel their pursuit of the midfielder, who is yet to feature for the Gunners in the Premier League, and whose eight appearances for the club have all come in cup competitions. 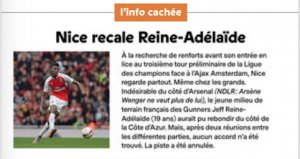 Nice are preparing for a tough season where they will hopefully try and juggle elite European football as well as their domestic fixtures as they try and qualify for the Champions League groups stages.

First, though, they need to see off Ajax in the qualifying round.