It’s rare to see a summer where there’s so much uncertainty around managers at so many of Europe’s top clubs. The Catalan media have been insisting Ronald Koeman’s days at Barcelona could be numbered, and Zinedine Zidane isn’t certain to continue at Real Madrid.

Christophe Galtier, who won the Ligue 1 title with Lille on Sunday, has publicly cast doubt on his situation, with Lyon and other French clubs also in the managerial market. Antonio Conte, another title winner, could leave Inter Milan, and there’s a list of coaches waiting on the substitutes bench to see if they’re called.

Tottenham are the highest profile Premier League club with doubts around their managerial situation. For weeks there’d been endless claims in Italy about various Italians being set to take the role.

That’s gone a little quiet, however, Tuesday’s edition of La Repubblica brings Tottenham and Conte back together, with the addition of Real Madrid.

According to the report, which focuses on the complete managerial chaos in Italy right now, Madrid, ‘as well as Tottenham’, are keen on Conte, and this has all happened in ‘recent hours’. 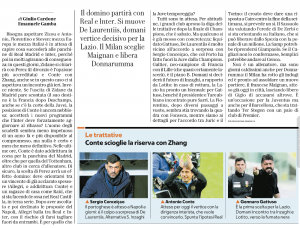 La Repubblica believe a lot will depend on what Zidane and Florentino Perez decide to do at Madrid, with that then impacting Juventus, where the Frenchman could go, Massimo Allegri and Conte.

The feeling being that Madrid would have the first choice, and Tottenham then presumably pick from what’s left.