Home Europe “We’ll have to see what happens” – Wolves player quizzed on whether...
SHARE

Wolverhampton Wanderers’ Rafa Mir is preparing for Spain’s semi-final clash against Japan at the Tokyo Olympic Games on Tuesday.

The striker has entered his final 12 months of contract and earlier reports have indicated Wolves are looking to cash in from his sale this summer.

Monday’s edition of AS has a detailed interview with the 24-year-old, and they quizzed him about where he will play next season.

“It’s a good question… (laughs). Things are happening, I have asked not to know much until the Olympic Games are over. We will see how they progress; I have one more year at Wolverhampton and calmly we will decide what is best for me,” Mir said.

The Wolves owned player was instrumental in helping Spain overcome Ivory Coast to seal a berth in the last four of the Olympic Games. 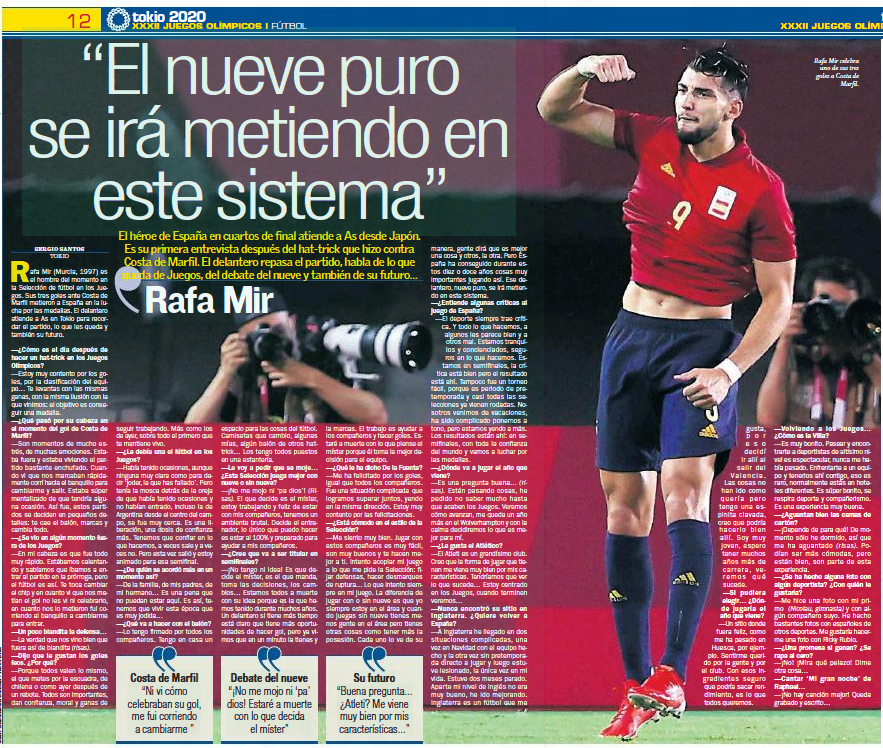 He came off the bench to score the late equaliser and finished his hat-trick in extra time.

Mir’s from last season while on loan at SD Huesca has caught attention from La Liga sides.

Atlético Madrid are included in the list of suitors and when directly quizzed about the possibility of joining Diego Simeone’s side, he said: “Atlético is a great club. I think the way they play suits me very well because of my characteristics.

“We will have to see what happens… I am focused on the Games, when they finish, we will see…”

The frontman wasn’t given a lot of opportunities in England, forcing him to go out on loan, and this could potentially open a door to return to the Spanish league this summer.

On his move to Wolves and the possibility of returning to the Spanish league, Mir said: “I have arrived in England in two difficult situations, once at Christmas with the team made and the other time without direct preseason to play and then I was injured, the only time in my life.

“Besides, my level of English was not very good, I have been improving. Things have not gone as I wanted but I have a thorn in the side, I think I could do well there. I am very young, I hope to have many more years of career, we will see what happens.”