Liverpool owned goalkeeper Loris Karius has spoken to the Turkish press after Besiktas’ derby win against Galatasaray at the weekend.

After a terrible start to the season, Besiktas beat their rivals thanks to a second-half goal from Umut Nayir, as they moved up to 8th place.

Liverpool loanee Karius was in impressive form and made some important saves to help his side get a vital victory.

Speaking about his uncertain future after the game, Karius said everything will be decided at the end of the season, with Sabah quoting him as saying: “I don’t know what will happen next season. If I want to continue at this club, and if Besiktas want me to stay, then I’ll stay.

“But there’s no point in talking about this at this stage of the season. We’ll have a lot of time to discuss these matters. We’ll see what happens.”

Recent reports from the Turkish press say the Black Eagles want to part ways with the German goalkeeper to replace him with Fulham’s Fabri. 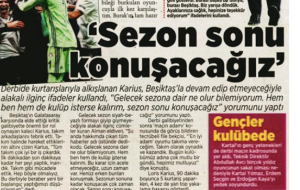 It’s claimed the Super Lig side now want to hold talks with Liverpool with regards to cutting short the player’s loan stay in Turkey.

Karius’ deal with Besiktas will expire at the end of the season and his Liverpool contract runs until June 2021.