With rumours that Divock Origi could swap Liverpool for Birmingham by moving to Aston Villa, questions are being asked about the future of Wesley.

As first seasons go, things could have gone a lot better for the Brazilian, who only managed five goals in 21 league appearances before a cruciate ligament rupture suffered against Burnley on New Year’s Day cut his campaign short.

Back in training and running since May, there’s hope the forward will be fully back for September, but the arrival of Origi would certainly put his spot in Dean Smith’s plans under pressure.

That’s why Lazio are now being linked, as they were very interested when he was at Club Brugge, only for them to miss out when he moved to Villa Park instead for €25m or so. 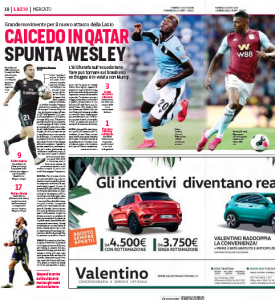 According to Corriere dello Sport, Wesley can now be bought for €15-17m, and ‘it’s well known how much Igli Tare, the Serie A side’s director of football, considers the player’.

Certainly something to keep an eye out for as Felipe Caicedo edges closer to a move away y from Rome, with Al Gharafa in Qatar the favourites to land the Ecuador international.