Pierre-Emile Højbjerg had less than a year left on his contract at Southampton after the end of last season and was expected to leave the club given he’d decided not to renew his contract.

Tottenham Hotspur were successful in acquiring the Denmark international’s services in August, beating Everton to the deal.

The midfielder has had a good start to his time in north London and speaking to the Danish media in September, the 25-year-old discussed how conversations with José Mourinho and Christian Eriksen, the former Spurs star, convinced him to join Tottenham.

In an interview with Kicker, Ralph Hasenhüttl has now detailed why his side had to allow the former Bayern Munich leave St James’ Park in the last window.

“We wanted to sell him because he only had one year of contract and didn’t want to renew. In return, we got Kyle Walker-Peters, an English youth national player from Tottenham,” he said.

The Southampton manager also talked about David Alaba’s contract situation at Bayern Munich and remains hopeful he and his side won’t be in a similar situation as the Bundesliga winners are with the defender.

“I don’t know the background, but it will be hard to find a face-saving solution for all parties. I hope we do not get into a similar situation,” Hasenhüttl explained.

“So, we have some players who are in demand, for example Danny Ings, where we are trying to extend the contract. We know that the player, who has a very high value in the club and among the fans, is also aware of this responsibility.

“Hopefully he will be advised well. We may not be a top six club, but I hope we have enough other arguments to convince him.”

Hasenhüttl, whose contract with the Premier League club lasts until 2024, also discussed his own future plans.

“My wife and I feel very much at home here, we love southern England, people like us. 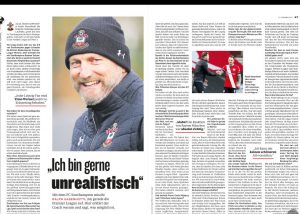 And I can fully concentrate on football here, the work is great fun,” he stressed.

“With Martin Semmens, my chairman, I have someone by my side who supports me. We went through the time after Leicester together, and a trust grew there that I didn’t know before in this business. I can’t think of a better job at the moment.”