Het Belang van Limburg has a short update on the forward, and they state he ‘would be close’ to joining the Eagles.

Another Belgian newspaper Het Nieuwsblad has a report on the Blues player, and their title reads ‘Batshuayi on the way to Crystal Palace’.

Within the report, it’s explained Batshuayi is close to joining Roy Hodgson’s side on a loan deal.

The attacker’s current deal at Chelsea runs down in 2021. According to the report, Frank Lampard’s side will extend his contract by a further 12 months so that they don’t lose him for nothing next summer.

Het Nieuwsblad state Club Brugge asked about Batshuayi, but they couldn’t afford to pay his wages. Newcastle also failed in their efforts to sign him.

Batshuayi had a short spell at Selhurst Park in 2019, scoring six goals in all competitions, and should he join them on loan again, he will be hoping to impress during his temporary stay.

Meanwhile, the attacker scored a brace in Belgium’s 5-1 win over Iceland on Tuesday, and after the tie, he spoke about a move to Crystal Palace. 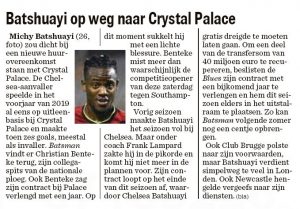 “Am I going to sign [new contract] at Chelsea to be loaned to Crystal Palace? You’re on the right track when you say that. It’s something like that,” he told RTBF.

“The most important thing for me is to have playing time and to be ready when I come to the national team.”