Napoli are in the market looking for a fullback, but before they bring in a new player in that position, they will have to find a solution for Faouzi Ghoulam.

Two days ago, Area Napoli had an exclusive report detailing the list of clubs looking at the left-back and they explained Watford are one of the sides to have conducted surveys for him.

Today’s edition of Corriere dello Sport once again reiterates the Naples club must find a new club for the Algeria international before signing another player in his position.

Nigel Pearson’s side get a mention and the newspaper presents the Hornets as an ‘example’ of the type of club interested in the defender this month. CdS adds Ghoulam would cost potential suitors around €12m.

TuttoMercatoWeb also has a short update on the player and they report the Premier League side submitted an offer for Ghoulam. 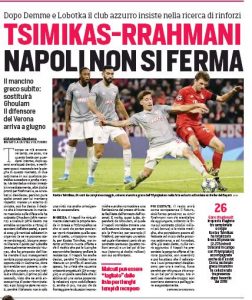 However, Watford’s offer wasn’t considered by Napoli because it didn’t meet their expectations. No figures have been mentioned in the report.

TMW believes Watford are unlikely to return with an improved offer, which is why Napoli are looking for French clubs.

Their idea is to allow Ghoulam go out on loan this month. So, in theory, if a loan is acceptable then that surely means Watford are still in the picture if they want to be.