Kiko Femenía was linked with multiple mid-table La Liga sides as the transfer window came to an end. There was an assumption the 29-year-old would be returning to his home country, and it was just a question of which club would take him.

Despite that, it’s not thought he’ll be staying with the Championship club for the current campaign. He’s appeared in half of the Hornets’ matches so far this season, and if Spanish newspaper Sport are correct, that could be where it ends.

They state Watford and Spartak Moscow are working on a ‘draft contract’ over the player’s move. According to the report, that would see him move to Russia initially on loan, with Spartak agreeing to a mandatory clause to then make the move permanent next summer.

Wyscout list Kiko Femenía as having a contract with Watford until June 2023, despite some other sources putting it at 2021. 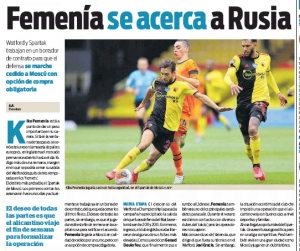 Nevertheless, Spartak is said to be the likeliest destination right now and there’s hope a deal can be arranged over the weekend, with the Russian window closing on October 16th.