Watford signed Cucho Hernandez in 2017 and allowed him to join SD Huesca on a season-long loan deal last summer. The forward impressed during his time in the Segunda División, scoring 16 goals and registering six assists in 34 appearances.

Today’s edition of the Catalan newspaper Mundo Deportivo claims Espanyol are keen on hiring Rubi as their new manager. The 48-year-old’s arrival at the club could see him bring a “gift” – Cucho Hernandez – along with him.

The 19-year-old Colombian attacker’s form for Huesca has not gone unnoticed. Apart from Espanyol and Huesca, Sevilla are also looking at the option of securing his signature. However, all clubs are aware that negotiations with Watford won’t be easy.

Watford wanted Hernandez to continue his development at Huesca for one more season and then take a decision on his future in 2019. However, Rubi’s potential departure to Espanyol could “disrupt the plans” of the Hornets. 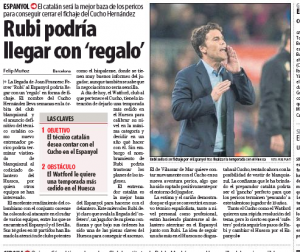 Hernandez and his camp have been made aware by Huesca that they want to retain his services for next season. On the other hand, Rubi, under whom he impressed in the 2017/18 season, wants to take the forward with him to Espanyol.

Either way, Watford want a “quick resolution” on Hernandez’s future.