That’s according to Super Deporte, who say the Spanish side are eyeing up the Hornets duo as part of their overhaul this summer.

Valencia find themselves in something of a financial crisis and as a result have spent this month selling off their prized assets around Europe.

That has already seen the likes of Rodrigo, Dani Parejo and Ferran Torres leave the club, with plenty of other departures expected in the rest of the transfer window.

Those players will need to be replaced, though, and with money tight, the La Liga side are eyeing up low-cost options.

That is why they have turned their attention to Watford duo Capoue and Suarez, with the club wanting loan deals rather than permanent transfers.

Starting with the midfielder, Super explain that Valencia are ‘negotiating the conditions’ in which Capoue could arrive at the club.

Both his age and their financial difficulties mean a paying a transfer fee is not something they can do, so a loan makes sense.

Watford are seemingly open to that as they are trying to get several players out of their squad following relegation to the Championship.

The key for Capoue moving to Valencia, though, is their new manager Javi Gracia. He worked with the player at Vicarage Road and made him a key player as they reached the final of the FA Cup. 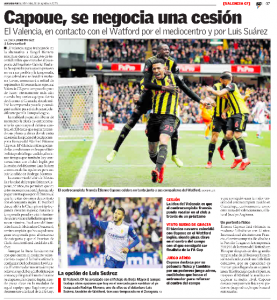 The relationship between the pair is strong, and Gracia feels that he offers the ‘qualities’ he needs to reinforce his midfield at Valencia.

Suarez, meanwhile, is a potential replacement for Rodrigo, who is set to complete a move to Leeds sometime this week.

Valencia have already eyed up Borja Mayoral to fill that hole, but they are working on ‘other options’ and Suarez is one of them after impressing on loan at Real Zaragoza last season.

‘There are also talks’ about a loan move for him, although it’s not made clear what Watford’s stance is regarding the player.

He’s been linked with moves all over Europe this summer, but there’s also been claims Watford want him for next season, meaning Valencia may have to do some negotiating if they want him too.