Takvim say Galatasaray have received ‘good news’ with regards to offloading Mbaye Diagne, after reports Watford are seriously interested in signing the Senegalese striker this summer.

The 28 year old, who’s been linked with a move to Nottingham Forest in recent weeks, is said to be a target for Watford, and is keen to continue his career in the Premier League.

Takvim claim talks between Diagne and Watford are progressing well, and his parent club Galatasaray are likely to accept offers in the region of €5-6m. Again, Nottingham Forest are mentioned as a possible destination for the attacker.

Diagne is currently on loan with Club Brugge, but it’s unlikely that he’ll spend another season in Belgium, given the troubles he’s had with his teammates and manager. 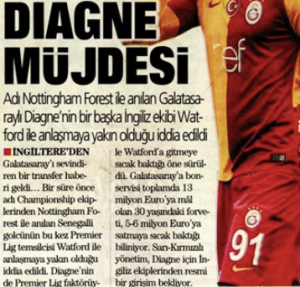 Gala paid €13m to sign him from Kasimpasa at the start of last year, but he was loaned out to Brugge after the Turkish club signed Radamel Falcao.

Diagne’s contract with the Super Lig side will expire at the end of June 2023.