Emissaries from Watford reportedly made a trip to the small city of Paços de Ferreira, in the north of Portugal, this weekend.

As reported by newspaper O Jogo, club officials were present at the match between the local club and Lisbon giants Benfica.

In not a surprising result, the Eagles won the match 3-1, and keep trying to stay alive in the title race, where they currently stand five points behind Porto.

For Benfica, two players had outstanding performances. One of them was Jonas, who scored a brace, something the club fans are used to seeing. The Brazilian now has 30 goals so far this season. 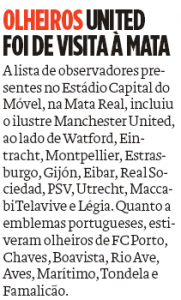 Now the unusual hero was Rafa Silva. The midfielder, who was having difficulties to convince at the Lisbon side, has finally found some good form, and besides a great display, also scored Benfica’s third goal.

For the home side, striker Luiz Phellype was much praised by the local press, not only for scoring the home side’s goal, but for being a constant threat to Benfica as well. It’s been a while since the 24-year-old has been showing some good potential.

There’s no indication who Watford were watching and their appearance in Portugal isn’t as expected sine Marco Silva left the club.