Bruno Varela is being edged towards the market by Benfica. The 23 year old goalkeeper isn’t first choice and Benfica believe they can get a reasonable fee and allow him to progress elsewhere.

Varela himself doesn’t seem to be pushing to get out of the Lisbon club, but Portuguese newspaper Record believe he’ll be convinced by the better financial packages available elsewhere.

Watford are the club presented as being at the head of the chase to sign Varela, report Record, and it’s stated talks are currently ongoing between the parties.

Pontus Dahlberg will start his Watford career fully this summer, but it may be thought the 19 year old could do with another loan spell. Signing for Watford in the winter window, Dahlberg was then loaned back to IFK Göteborg.

There’s high hopes for the youngster in Sweden, but Watford probably need to clear up their goalkeeping department and devise a long term plan for the player. 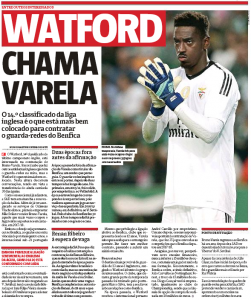 Where Varela would fit in that isn’t explained, and it’s stated Benfica want a minimum of €15m.

England is the ‘most likely destination’ for the goalkeeper, with Watford ‘leading the group’ of clubs interested, although they’re the only club actually named.

Nottingham Forest had also been linked to Bruno Varela, but Portuguese newspaper A Bola dismissed that at the weekend.