If there’s one Watford player few expected to have the standout season he’s having, it’s probably Abdoulaye Doucouré.

Never really trusted by Walter Mazzarri at first, the 25-year-old did show glimpses of his talent during the second half of last season, but this emergence as one of the best, at least stat wise, midfielders in the Premier League was never predicted.

Always thinking about making the France squad for the World Cup in Russia, the Hornets’ star is determined to have the best season possible, and nothing’s changed under Javi Gracia.

France Football this week had a brief chat with the midfielder to find out a bit more about him. 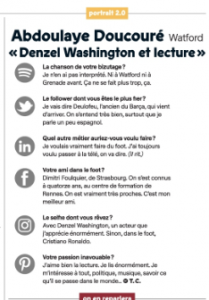 Revealing he never had to sing an initiation song, either at Watford or at Granada, where he spent the second half of the 2016 season on loan, Doucouré also opened up about his favourite pastime: reading.

He said: “I love it. I read a huge amount. I take an interest in everything: politics, music, knowing what’s going on in the world.”

Wanting above all a selfie with Denzel Washington (or Cristiano Ronaldo if he had to choose a footballer), Doucouré never wanted to be anything else other than a footballer.

As for his favourite follower on Twitter, or at least the one he’s proudest of: “I’m going to say Gerard Deulofeu, the ex-Barca, who’s just arrived. We get along very well, especially since I can speak a bit of Spanish.”