Watford and Southampton ‘maintain their interest’ in Jean-Clair Todibo, according to Mundo Deportivo.

The defender will return to Barcelona after finishing his loan spell at Schalke this month.

Leicester City were also interested in the centre-back and it was the belief the Foxes were willing to take the necessary steps to sign him.

The newspaper now states Brendan Rodgers’ side have ‘withdrawn’ from making a bid for the Frenchman, just like AC Milan.

The Hornets and the Saints are still interested in the 20-year-old, and Mundo add Napoli have joined the race for the former Toulouse man. The Serie A side could be without Kalidou Koulibaly next season and their plan is to replace him with Todibo.

There’s a meeting scheduled between the Camp Nou leaders and the player’s agent. According to the report, Todibo values ‘all the proposals on the table’ and Quique Setién’s side will need a fixed fee of €25m to cut ties with the central defender.

Barcelona’s plan is to sanction Todibo’s sale in June so that they can raise money to balance the accounts for this season. 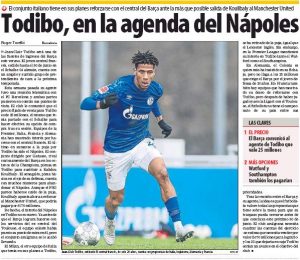 Mundo, however, don’t mention if the likes of Watford, Southampton, Napoli and other suitors are willing to complete Todibo’s signing in June.

Everton, who have long been credited with an interest in the Frenchman, don’t even get a mention in Mundo’s report.