Watford are continuing their attempts to sign Ismaïla Sarr from Rennes.

The Hornets have been on the player’s track for much of the summer transfer market, and with the window closing on Thursday at 5pm, it’s getting to the now or never stage for the club.

Wednesday’s edition of L’Equipe reports the 21 year old has already agreed a deal with Watford. He’d be signing a five year contract with the Premier League side, as long as they can reach a deal with Rennes.

The French newspaper says Watford have been ready to offer €30m plus a further €5m in bonus payments, whereas Rennes and their president Olivier Letang have been holding out for a €37m deal. 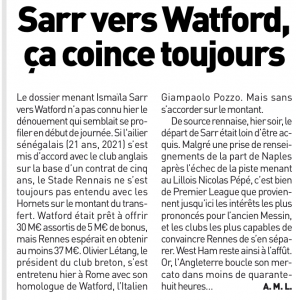 Letang met Giampaolo Pozzo in Rome yesterday, with the aim to come to an agreement. They didn’t manage to do so, and time is now running out.

West Ham are also said to be keen, although it doesn’t appear they’re as far along the track as Watford.