Home Europe Watford seem to have a transfer plan developing, as evidence builds up
SHARE

It looks like Watford are concentrating more this season on scouting matches in Portugal.

The Hornets have sent officials to scout Portuguese matches in previous seasons, but this campaign they appear to be popping up more frequently.

Just over the past couples of weeks, Watford had someone watch the Champions League match between Benfica and Bayern Munich in Lisbon.

Then, on Friday, they had someone attend the FC Porto’s game against Tondela. Sunday again saw a Watford spying mission, with A Bola reporting the Premier League club were among a number of sides represented as Belenenses faced SC Braga.

The Watford ‘spies’, as A Bola calls them, were joined by others from Manchester United, AC Milan and Olympiakos, as well as several Portuguese clubs.

Braga won 3-0 and the Man of the Match was Ricardo Horta, who played on the left of midfield and scored one of the goals. Horta is an interesting footballer, he’s 24 years of age and came through the youth system at Benfica before moving to Vitoria Setubal. From there he went to Malaga and then returned to Portugal with Braga. 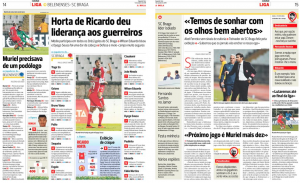 As some trivia, his brother Andre Horta joined Los Angeles FC in the summer from Benfica. Younger, at 21 years of age, he recently put in an excellent performance as Portugal U21s beat their Welsh counterparts in Bangor. The pair have the same agents.

With Watford upping their watching of Portuguese football it would be assumed it’ll have an impact on upcoming transfer windows.